I always knew that I wanted to be a DJ, even before I really knew what a DJ was. I knew the people on the radio were called DJs, and I wanted to be like them. At some point I figured out it involved a record player and a set of headphones.

In my teens I used to record songs and skits from the radio and make my own mixtapes. I had a very well-rounded musical upbringing that led to a wide range of musical interests from rock to hip hop, Broadway show tunes to classical, Michael Jackson to Dolly Pardon, to gospel and soul.

Ultimately, my passion focused on hip hop, after Run DMC’s 1986 crossover hit “Walk This Way” drew me in. My dad was a big fan of Aerosmith, so I always had their music around the house to listen to. But there was something about that broken beat, record scratching and breaks that turned me into a lifelong fan. 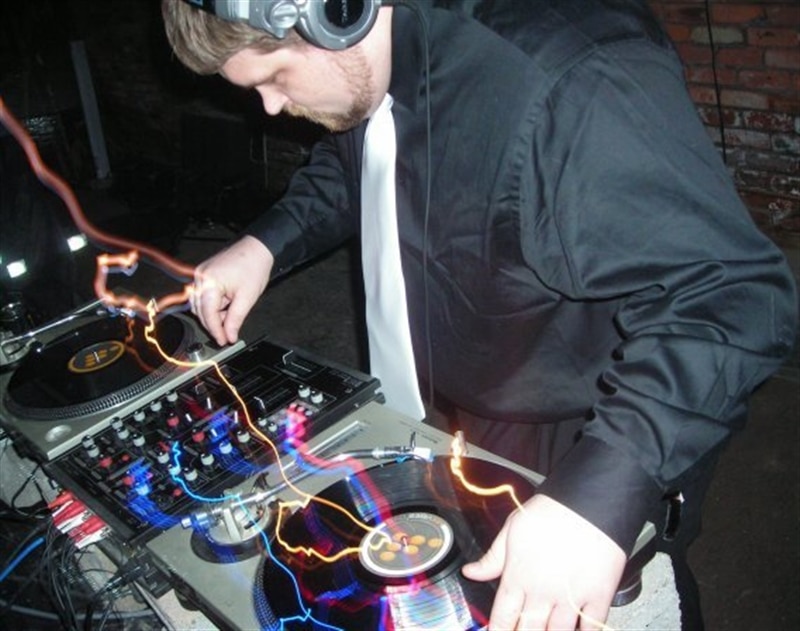 I had my own little record player that played 45s, and when I was a kid, sometimes you could peel a record right off the side of a cereal box. But I was never interested in what was on those records, I was more interested in the sounds I could get it to make that weren’t intended. I also had an interest in watching break dancers on Soul Train and MTV, and mimicking their moves.

When I was sixteen a girl moved into my neighborhood from England, and we became fast friends. One day she asked me, in her lovely English accent, “Do you like rave music?” Even though I was only about 40 miles away from the birthplace of techno (Detroit), I had no idea what it actually was. So she let me borrow a tape, which contained a mix of mostly Industrial music. One song on that tape stood out to me: “Join in the Chant” by Nitzer Ebb. Later on, in 2007, I would see them perform live at the Movement Festival in Detroit.

Around that same time, my friend Sam, with whom I shared a common interest in computers, had me over to hang out. He introduced me to a file format called an “MP3” which was only five megabytes in size and could store an entire song in digital, near-CD quality. When I realized the potential, I started scouring the internet, dial-up bulletin board services, and AOL for music, and this led me to what has become one of my primary go-tos as an adult: electronic dance music. 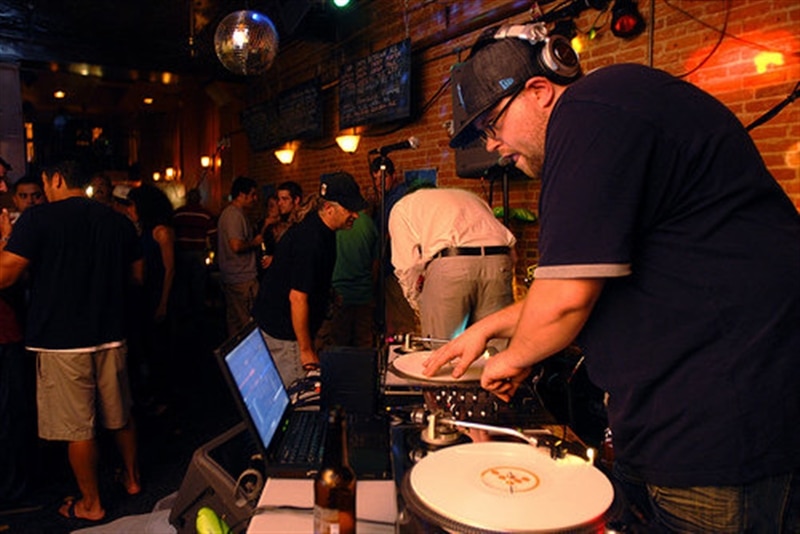 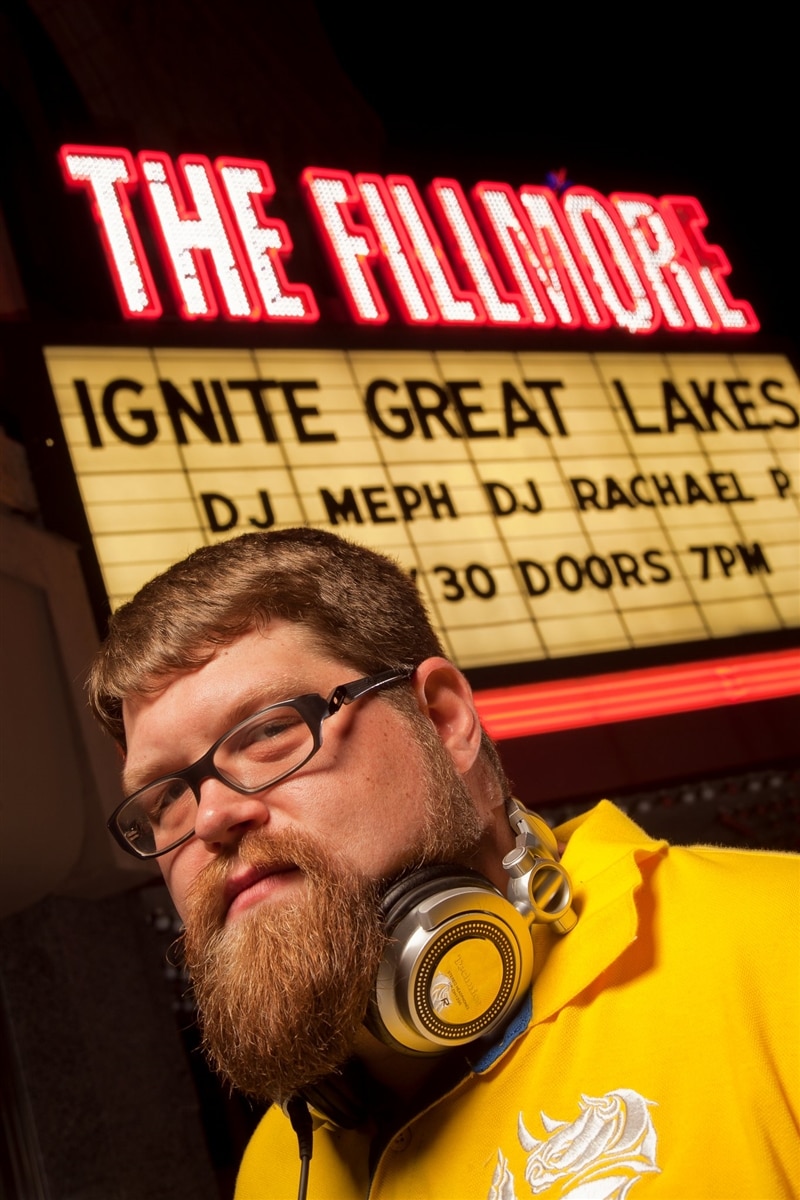 I started hearing buzz about Detroit Techno and underground warehouse parties. At the time, there was a world-famous night club in Detroit called "Motor." During its heyday, it had been ranked as the best electronic dance club in the world by Urb Magazine and made the Top 10 list of best clubs in the world by Rolling Stone. On my 18th birthday, I decided to go, and that began my love affair with music in the city of Detroit.

Things got a little bleak in the early 2000s when the State of Michigan started cracking down on dance parties, pushing it all underground. I wasn’t well-connected enough to know that most of it moved to after-hours gay bars called "Blind Pigs" where they would low-key serve alcohol after 2 a.m. and you could dance all night until the sun came up.

In 2006, however, electronic music started coming back, in the advent of more legitimate venues and festivals. I met a group of cats who had a production company called C.O.R.A.D.O.R. United, who threw parties all over the Detroit area. This crew brought me under their wing and showed me the techniques I would need to learn to finally live my dream of becoming a DJ. I was so hungry for it by then, that I went all in. I bought the cheapest set of broken-down turntables I could find, and a used 3-channel mixer from a friend and got to work.

I learned the craft, how to beat match, and eventually played my first gig, at a Movement after-party at the now defunct Studio 54, located at The Leland Hotel. I also spent a few years being mentored by a local hip hop DJ named St33lo, who taught me about the art of digging for records, scratching, and everything I could ever dream of knowing about the hip hop movement, and it’s five elements:

I played at parties here and there, and even got to deejay for a Wu-Tang "Killer Bees" group in Detroit called The Wisemen. Eventually I met an Electro House producer that went by the moniker "Boof" in 2007. We formed a tag-team group named Lune Noir; a name given to us by Praga Khan of Lords of Acid and started pushing the pavement right away.

Our debut mixtape, "Electronic Music Revival" got us booked at one of the world’s premier electronic music events, Winter Music Conference 2008, in Miami Beach, Florida. We came away from that experience with offers to play all over the world, and we did tour for a short time, but ultimately, we were unable to figure out how to manage all the sudden interest, and our gigs started slipping away from us. The last show we played was in Charlotte, North Carolina, in 2012, with a progressive house artist named Kenneth Thomas, who is also from Detroit, and came up playing at church youth group parties in my hometown. 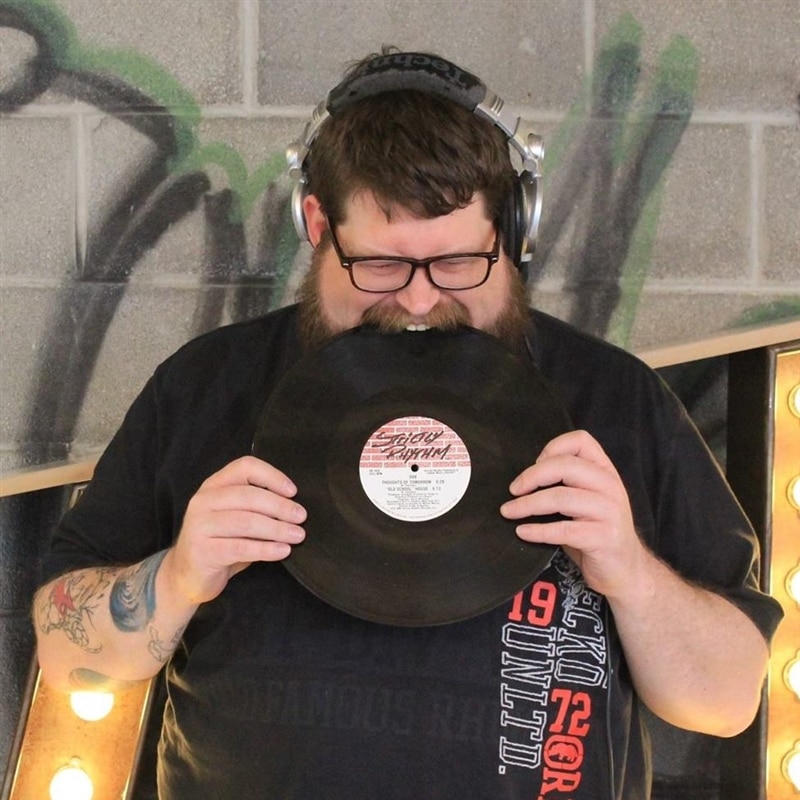 Music Is My Religion

Since 2012 I have settled further into my software engineering career, and I certainly don’t party like I used to. But shortly after my last real show, I got introduced to the Burning Man culture. Since then I have attended about eight of these events, including going to the “big burn” last year at Black Rock City, Nevada.

A big part of this culture is gifting, which means to offer your talents to others without expectation of anything in return. Since music is mostly all I’ve ever known, that became my primary gift, and I share that gift with any camp that has a sound system and is gracious enough to let me play.

I get so geeked about these performances that each year, after I come home from burning the effigy, I immediately start a new playlist and start collecting tracks for next year’s set; carefully curating a sound I think people will want to move to after another year goes by.

One of the greatest experiences of my life in music happened last year at Burning Man, where I got to play a sunrise set on the Esplanade, which is the inner most ring that gets the most foot traffic. Sam, my childhood friend that I mentioned earlier, came out to watch the sunrise with me as I moved the dance floor until I ran out of music to play.

I love sharing music with people, and I love inspiring people to dance. Music has always been a big part of my life, but I’m still growing, and will always be progressing as a human, and as an artist, with a passionate drive to expose myself and others to new sounds we haven’t heard before, and old sounds in a completely different way.

39 trips around the sun has landed me here, quarantined at home in social isolation. Of course, I haven’t let this opportunity to continue my journey go to waste. I’ve been live-streaming DJ sets on Twitch every Sunday night, as well as working on new DJ sets and trading music with friends more than ever before.

Music is my religion, making my body my temple. Whether it’s my hands plucking away at guitar strings, feet hitting the kick drum, my mouth blowing away on the trumpet, my vocal cords singing away in the choir, or my whole body coming together to move a dance floor behind a set of turntables, when I’m making music, in any way, shape or form, that is where my heart feels at home.

With that, I’ll leave you with this quote from the late and great Jimi Hendrix, which has inspired me at nearly every step of my musical path:

When I was a little boy, I believed that if you put a tooth under your pillow, a fairy would come in the night and take away the tooth and leave a dime. Now, I believe in myself more than anything. And, I suppose in a way, that’s also believing in God. If there is a God and He made you, then if you believe in yourself, you’re also believing in Him. So, I believe that everyone should believe in himself. That doesn’t mean you’ve got to believe in heaven and hell and all that stuff. But it does mean that what you are and what you do is your religion.

I can’t express myself in easy conversation … the words just don’t come out right. But when I get up on that stage … well, that’s my whole life.  That’s my religion. My music is electric church music, if by “church” you mean “religion.”

I am electric religion.

It's interesting to think about how music has and will continue to evolve coming out of COVID-19, especially around concerts and crowd gathering. However, I'm staying optimistic on how artists, performers and attendees can still find new ways to enjoy it.

Here are a few personal thoughts on where I think we'll go from here:

Get In Touch With Us.

Our friendly Personal Loan Experts are here to help!

Team Member Microadventures: Making The Most Of Michigan

3 Ways You Can Support Your Community Heroes During COVID-19

We are thankful for every community hero across the world fighting COVID-19. Understand the top three ways you can help support them.